The two neighbouring “departments” of Provence and the Gard have for centuries been conjoined by the Rhone River, which served as the boundary between the Holy German-Roman Empire and the domains of the Counts of Toulouse, symbolized by the two great fortresses on either side of Beaucaire-Tarascon, about half an hour away by car from Uzès. 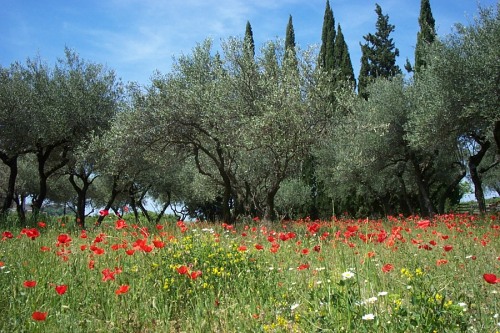 From  Uzès it is possible to explore these two cultural realms with a variety of day trips, of which we mention some – but not all – here.

In the house at Rue Saint Roman you will find a detailed list of recommendations and tips ready for our guests.

The Uzès Valley is home to several Roman heritage sites but Nimes and the magnificent Pont du Gard boasts well-preserved baths, canals, temples, triumphal arches and the Nimes arena – a Coliseum – used even to this day for French bullfights and various cultural events. The ferias, celebrated in June, draw visitors from all over Europe.

Named the City of Popes, Avignon is definitely worth a visit. Apart from the wonderful medieval castle and cathedral of the pontiffs and the city’s impressive, intact city walls, Avignon has a rich arts scene with theatre, film, photo and arts other festivals all year round. The Avignon Performing Arts Festival in July is the biggest in the world.

Like Nimes, Arles has incredibly well-preserved Roman ruins including an amphitheater and recently the only known portrait of Julius Caesar from his own time – a bust – was discovered in the Rhone River at Arles. Arles – and the nearby town of Saint-Remy de Provence – is of course also associated with Van Gogh.

The Rhone river delta, the Camargue, is a unique nature reserve where hoards of black bulls and Camargue horses running wild get disturb flamingo flocks munching away in the shallow waters. Don’t miss the colourful gypsy communities around Saintes Marie sur Mer and the delta town’s fortified church dating back to the 11th century, home to the gypsy saint Black Sarah.

The weather in Uzès is generally mild and sunny. Locals frequently say that the area only has two seasons: summer (nine months) and winter (three months). Spring – March-April-May – is generally mild and pleasant. June to September tend to be a good deal warmer, often around 30 degrees Celcius. Even in winter the area remains green and mostly sunny. There are some brief but heavy rainshowers and it very rarely snows.

The public outdoor pools are just a two minute walk from the house, set in a beautiful public park. Single tickets and carnets of 10 entries can be purchased at the entrance. Beware that swim slips are mandatory for boys and men in France, meaning no trunks or bermudas allowed.

There are several river beaches along the River Gard. One of the best is by a Roman bridge near Collias, 8 kms from Uzès. 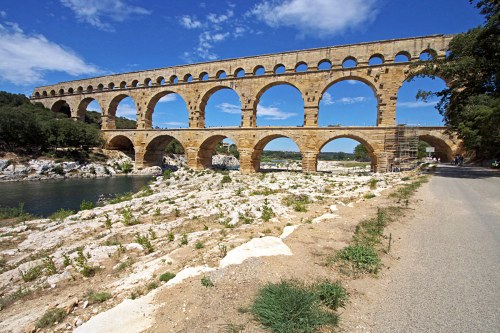 SWIM UNDER THE PONT DU GARD

One of the most beautiful river beaches is by the Roman aqueduct, the Pont du Gard. Swimming under the monument or just relaxing on the banks of the river is a captivating, unique experience.

The beach at l’Espiguette in the Rhone delta by the ancient crusader town of Aigues-Mortes, is a wild, unspoilt nature reserve on the Mediterranean – and very popular! Have lunch at Aigues-Mortes and get a dose of dramatic medieval history on your way.

A five-minute drive from Uzès and hidden away in beautiful woods lies a large outdoor waterpark, La Bouscarasse, which is fun for both adults and children.  Click HERE for more information.